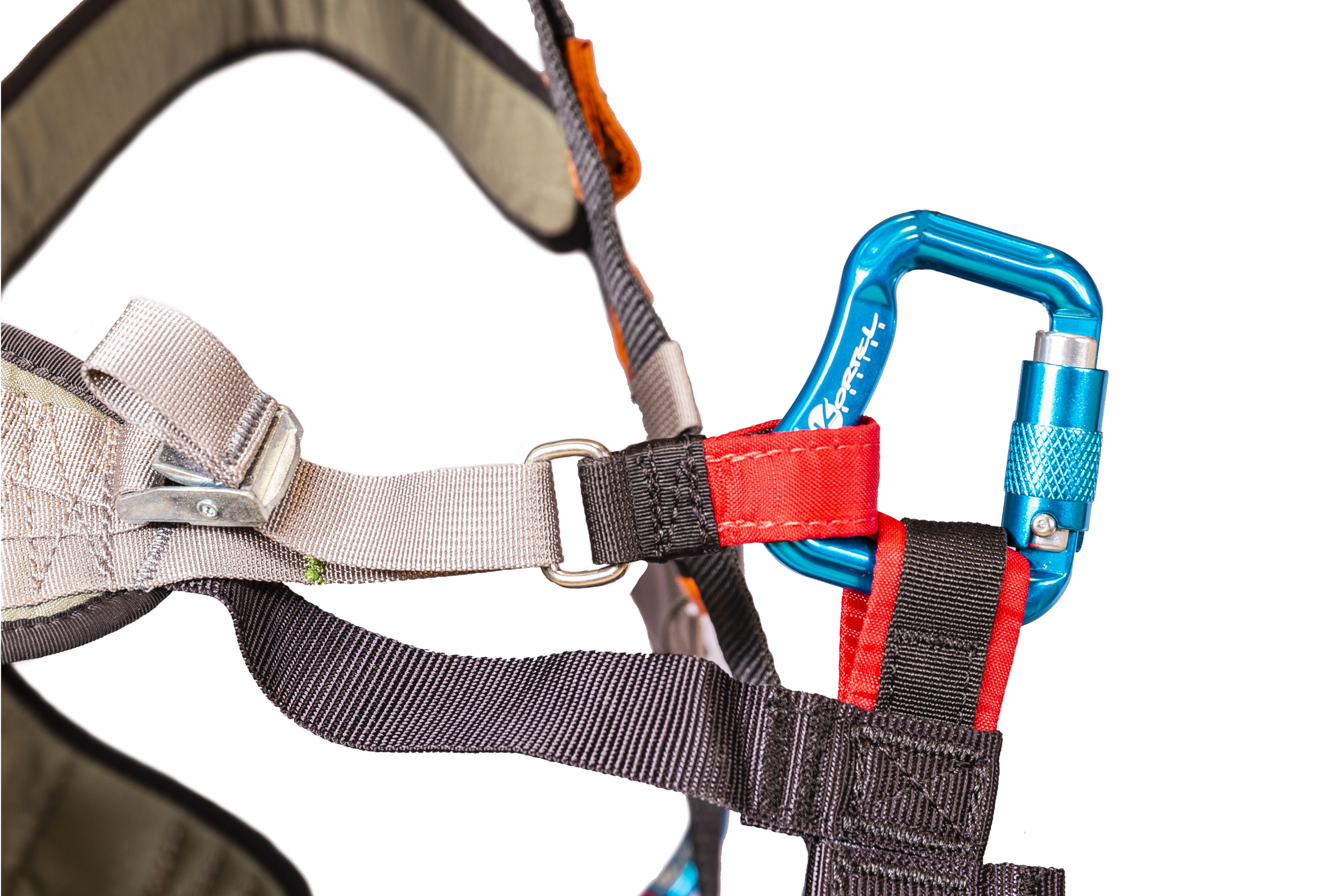 Connectors (in the broadest sense of the word) are essential for paragliding. Their function is to connect the harness to the canopy and/or the reserve parachute. They can be flexible, rigid, self-closing, with screws, etc...At present, the strength required of them must be at least equivalent to the strength of the anchor points on which they are mounted.

An EN 1651 approved fifth wheel is tested at least for 100kg of GVW at 15G, which gives a total load of 1.5T on the whole chassis. Being anchored on the 2 attachment points, we can therefore deduce that each anchorage point must withstand a tensile force of at least 750kg. If the shoulder rescuer is connected, the anchorage points are also tested at 1.5T, i.e. 750kg on each point.

Connectors that will be mounted on a fifth wheel should ideally be able to withstand at least 750kg breaking load so that they are not the "weak links" in the chain. The breaking load information is normally marked on all connectors (as far as possible!), as shown below.

To date, the vast majority of harnesses are equipped with automatic aluminium alloy carabiners. They are light, easy to handle and seem to be the ideal solution.

Let's take a look at the design of these self-closing carabiners.

Their design is directly linked to that of climbing and mountaineering carabiners, and generally takes up all of their functions.

However, one of these characteristics can become a major drawback in the use we make of them in paragliding: the functional clearance allowing the opening under load.Indeed, for safety reasons, a climbing carabiner must be able to continue to open under a load of 80kg (weight of a man). Therefore, there is a functional gap in their design that does not block the opening of the finger when it is loaded like this.In paragliding, we are permanently suspended from our connectors, but this load is not constant. In fact, in flight we are subjected to a multitude of lightenings and accelerations which respectively reduce or increase the load applied to these connectors.This leads to a phenomenon called "fatigue" because the connectors are alternately loaded and unloaded. 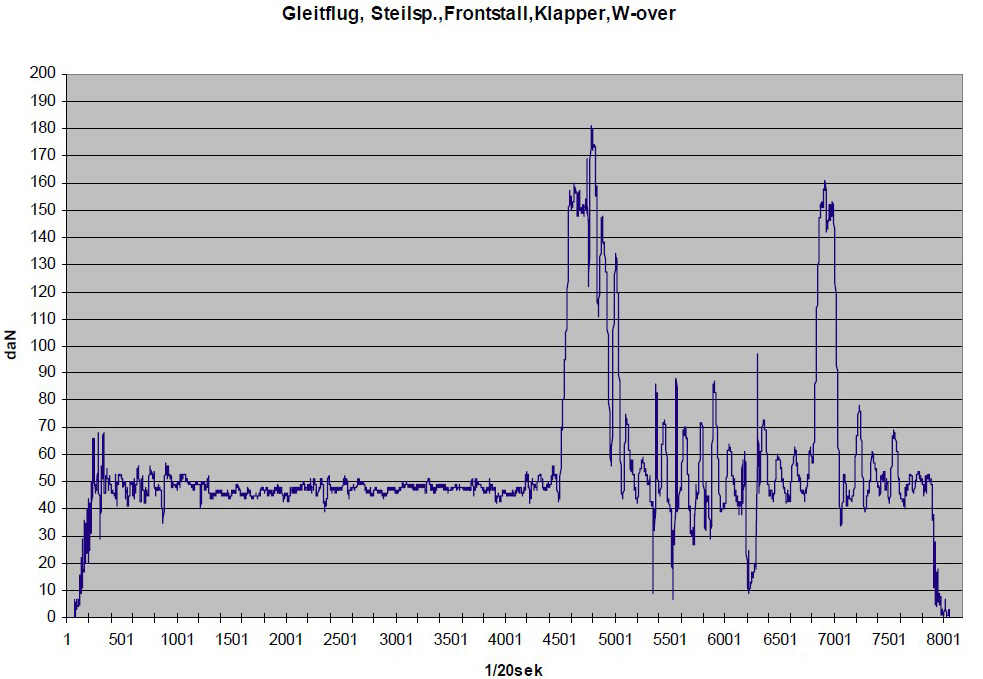 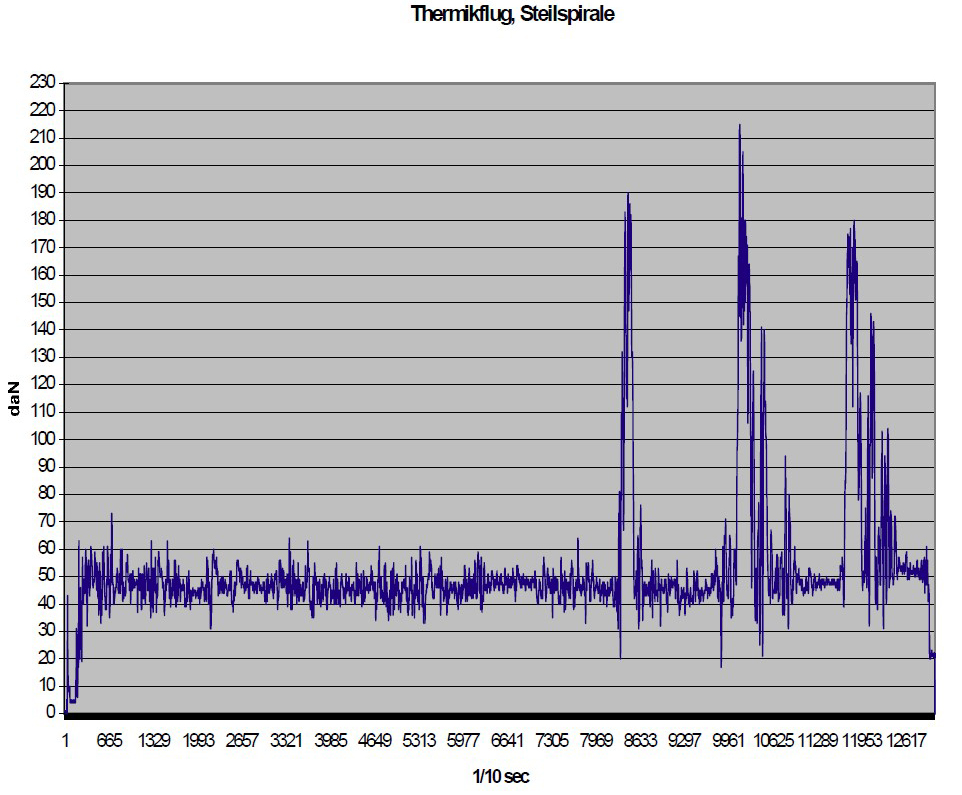 Measurements in thermal, then in stabilized spiral (Source: DHV)

Tests have been conducted to evaluate this fatigue on the automatic aluminium carabiners, and have shown that in order to fly safely, it is necessary to change them at most every 5 years or 500 hours of flight.

We saw in the first part that the intrinsic design of certain connectors could create a problem to be taken into account.In this second part, we will look at another characteristic that should not be overlooked when choosing connectors: multi-directionality.

Connectors are supposed to work in their preferred axis, but it is possible that they may find themselves positioned differently and their resistance may then be significantly reduced. 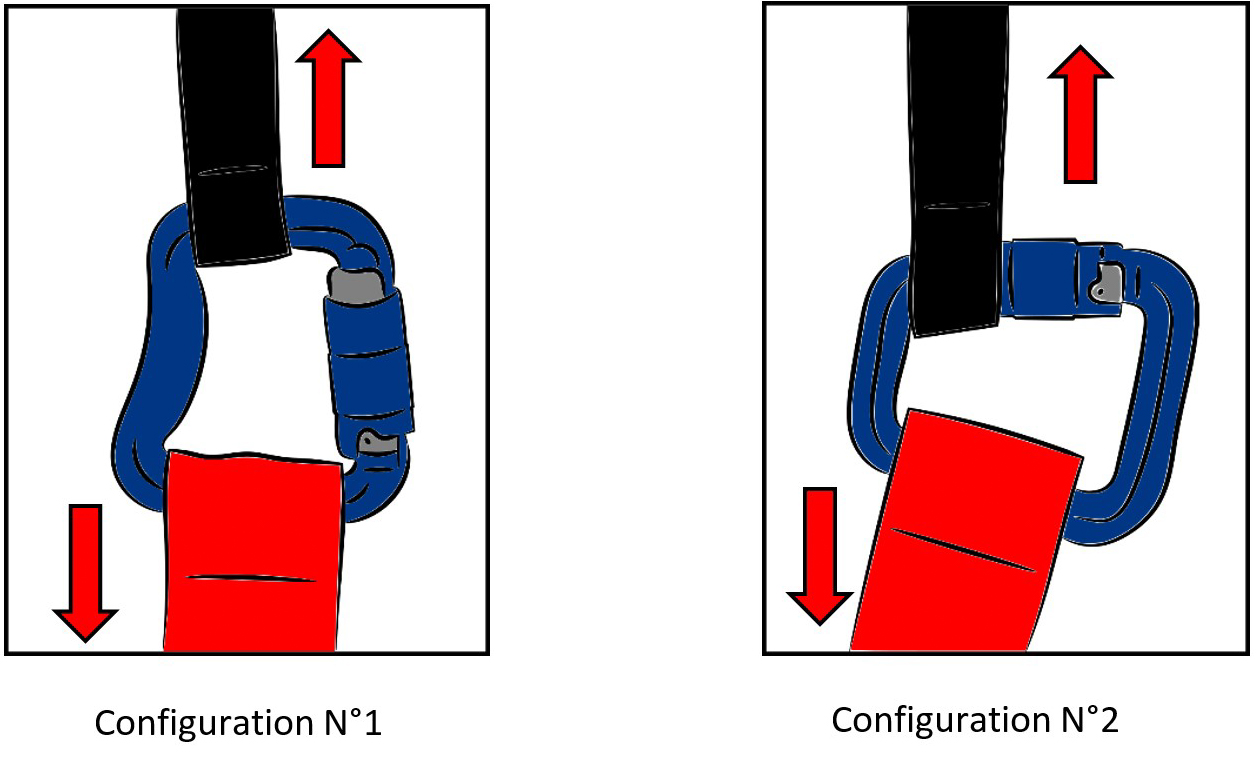 This is particularly the case with automatic aluminium carabiners, where the resistance can be halved in the No. 2 configuration compared to the No. 1 configuration.

It is therefore important to keep the connectors optimally positioned to avoid configuration No. 2 as much as possible. To do this, O-rings can be used to secure the connector in its optimum working position. 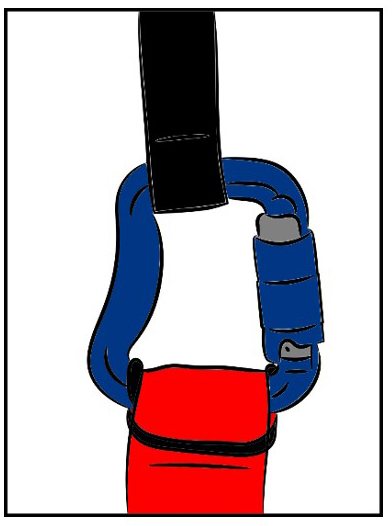 It is also important to check the dimensional match between the connector and the elements to which it will be connected. The dimensions of the connector must be adapted to the Dyneema webbing and/or halyards that it is going to connect together. 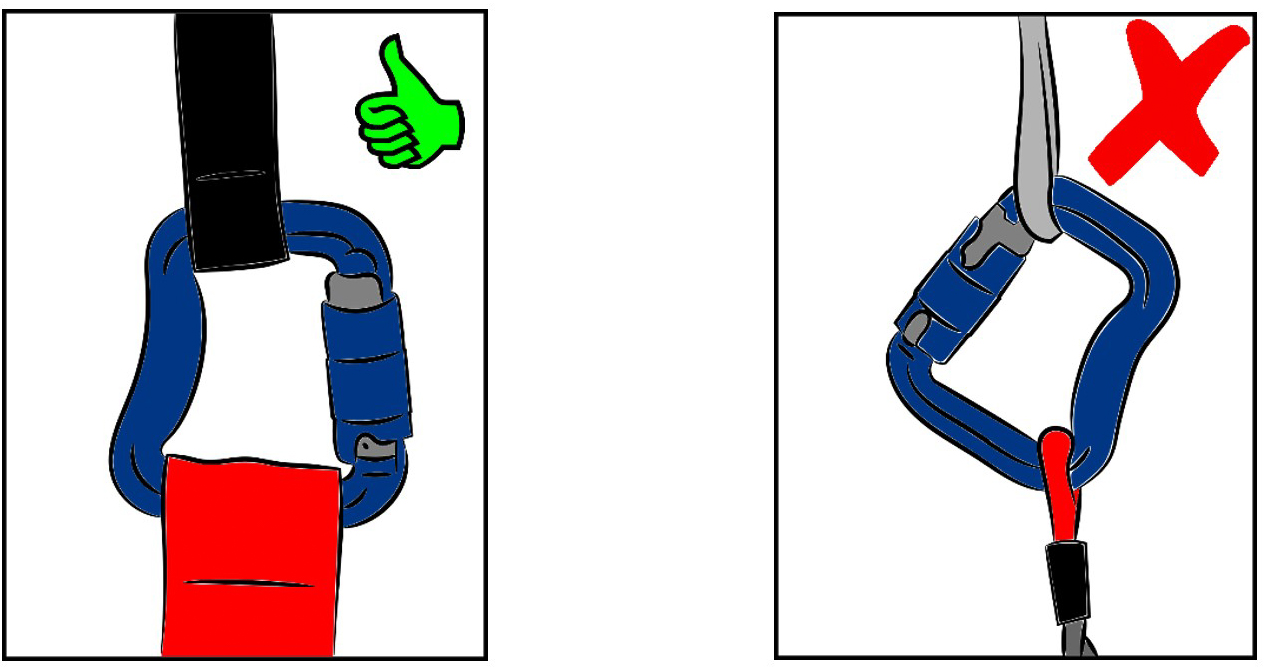 There are also certain types of connectors whose design makes it almost impossible to see them positioned improperly. 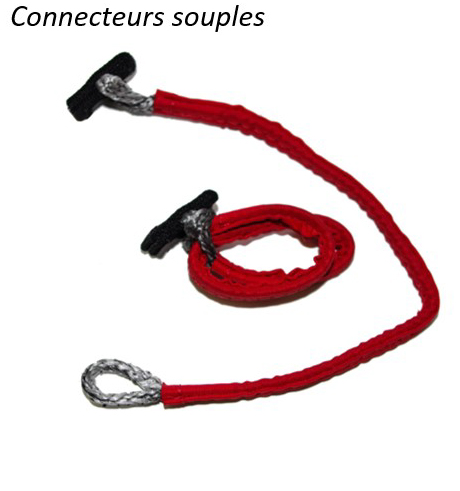 Moreover, these different connectors, by their design, are not subject to the fatigue phenomena we mentioned in the previous article. In fact, they are permanently in contact with each other when they are closed. The Pin-Lock connectors are given by Finsterwalder for a life span of 8 years in solo use, with no limit to the number of hours of use!The soft connectors are of unbeatable quality: they fit any Dyneema webbing and/or halyard.

In a future article, we will see more about the specifics of the connection of the reserve parachute.

The shoulder anchor points are tested in the same way as the main anchor points, i.e. at least 1.5T or 750kg on each point. The connectors positioned at this point must therefore have a minimum breaking load of 750kg.As these connectors are usually hidden in the shoulders or under a neoprene flap, it is imperative to check regularly that they are properly closed. The micro-vibrations generated by car movements, numerous manipulations, etc... can literally unscrew the screw links, even when tightened to the torque.It is therefore preferable to use connectors for this connection to the shoulders that are not subject to these phenomena and that do not require too frequent inspection. Péguet quick links with thread lock or flexible connectors are currently the most effective solutions. For Péguet links, ovoid shapes with a minimum diameter of 6mm are the most common.

INFO: You can find a value of 350kg marked on these Ø6mm links. This corresponds to the working load under which the link can still be handled (opening of the ferrule). The breaking load is much higher (1750kg), and is therefore perfectly suitable for this application.

In case of connection to the main links (ventral rescue), there are 2 possible solutions:

1 - If the two risers are connected to the same connector, the reserve riser will normally take the place of the sail's riser when the latter is lowered and no longer exerts any force. However, if the situation were to lead to a mirror effect, the two risers could exert opposing forces, and cause the connector to work in an unfavorable axis (see previous article).In addition, the risers can also get stuck under the ferrule of the automatic carabiners, and cause them to tilt when tensioned, putting them in an unfavorable strength configuration. 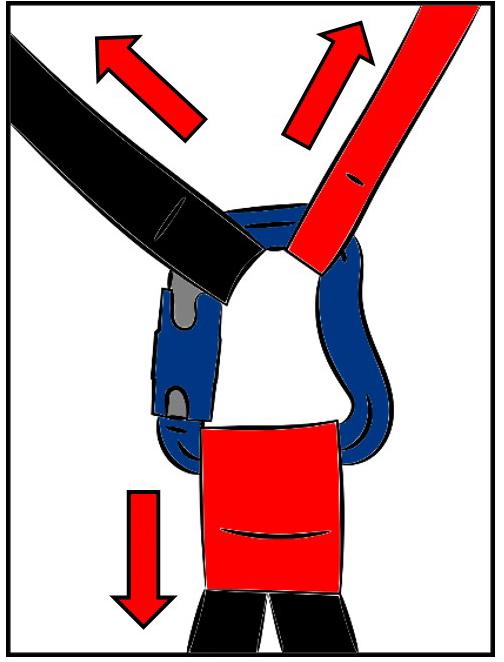 In this situation you must therefore be careful to use connectors that are not sensitive to this multi-directionality of forces (Péguet, flexible connectors), or to carry a suspension cutting system to be able to cut a riser from the canopy if the canopy starts to fly again after the rescue is deployed, and would tend to generate a mirror effect. With a hemispherical rescue with mirror effect, the angle between the risers is around 90°. With a Rogallo (which has its own speed), it is possible to reach 180° and thus induce these efforts in the small axis, the weakest one.

2.- If two risers are connected to the same anchor point with two separate connectors, it is also possible that a mirror effect will generate opposite forces on the anchor point. In this situation, it is the construction of the anchor point itself that will determine the strength of the assembly.Same remark as before, the use of a line cutter is recommended to cut a sail elevator in case it would fly back and increase the generated forces. 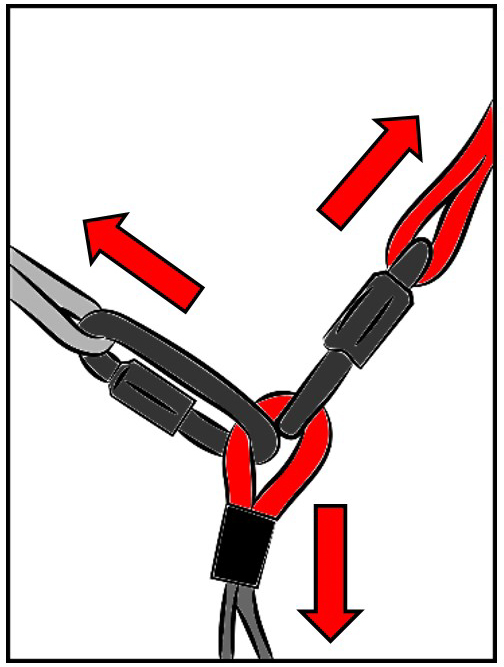